“London Rippers” – An extreme example of when branding goes wrong

Pull up a chair for a tale of “when branding goes wrong” that seems like something of an urban legend, but was actually the unfortunate reality of our local Frontier League baseball team, the “London Rippers”. Travel back in time to 2012, when a group of London, Ontario talented young people came together to create a sports franchise named after UK London’s most infamous serial killer. While a few years have ticked by, the lessons of this lamentable story remain relevant and should be heeded with extreme caution by new, growing and established brands alike. 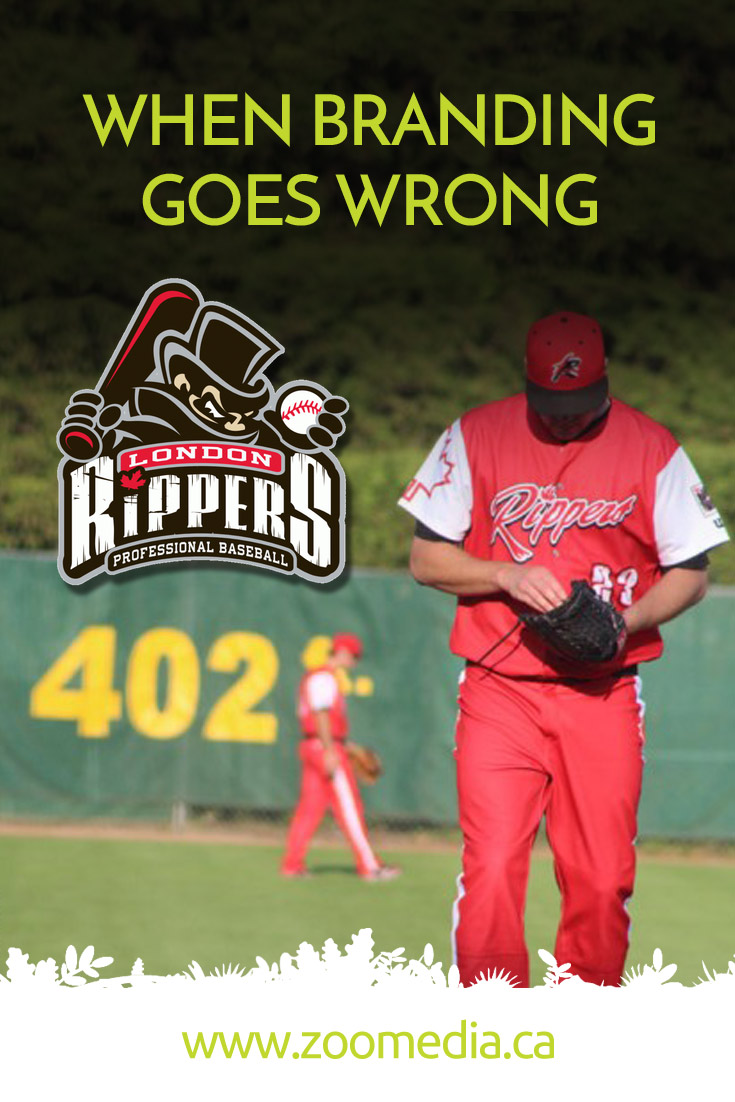 A rocky start and cutting end for a misguided marketing ploy (bear with us, the Jack the Ripper innuendos are a constant in this article)

After several renditions – from the Slippery Rock Sliders to the Cruisers – the London Rippers baseball team was (re)born with a name that instilled fear and a palpable degree of disgust in the hearts of their fans.

Even just hearing the name, it’s hard to avoid the brand’s unflattering connection to the infamous 1888 murderer. But to seal the slippery deal, the team President decided to evoke the visual embodiment of our good friend “Jack the Ripper” in all the team’s marketing collateral. This meant, the mascot and logo were not in reference to a Jack Rabbit or Jackal, but rather, a grown man who wielded a baseball bat in an ominous (nay murderous?) fashion.

Can you imagine the creative direction given to that logo and costume designer? One can only imagine he/she likely does not showcase the end product at the top of their design portfolio – unless they’re applying to work for a fun house or a boss with a particularly crude sense of humour.

How did the baseball franchise strike out so sorely? Well, they made a lot of assumptions, which as we know makes an ass-tonishing serial killer out of you and me.

When the inevitable public uproar began to emerge in response to the Rippers new brand, the team’s President, David Martin, went with a no-apologies approach to his response. Despite the hundreds of Tweets and extensive local and national coverage chastising the name choice, Martin maintained “ripper” referred to a ball hitter who exerts enough force to rip the material off the ball. As for the logo and mascot? Well, they obviously weren’t showcasing Jack the Ripper, but rather a disgruntled player who ripped one too many baseballs.

How high were our eyebrows reading these sentiment? Pop fly high, and you?

While we appreciate Martin’s dedication to his enterprise, when thousands of your target audience members are outraged at your choices, it may be time to change – rather than defend – them.

Despite the popular saying, all press is certainly not good press and the Rippers proved this. From the Executive Director of London, Ontario’s Women’s Shelter through to the National Post, parents and news outlets alike sent daggers the team’s way. The franchise was basically boycotted and, less than a year after this major marketing mishap, they folded.

The thing about brands is once they are damaged, they are extremely hard to repair. So, how could the Rippers have avoided this monumental marketing catastrophe? Equally as important, how can you safeguard yourself against a branding whoopsie of small or stadium-sized proportions?

Ensure your market research is not MIA

We recognize the Ripper example may be hard to empathize with because it is so hyperbolically bad. However, there are countless brands who have made missteps they have struggled (or failed) to recover from. Remember Pepsi’s ad that trivialized the BLM movement or when Dove featured a black model essentially “taking off” her dirty skin for a white counterpart? We certainly do, and their tanking sales show their target audiences remembered too.

Don’t rely on the people sitting around your boardroom to determine what your audiences want. Reach out to the consumers your product, service or brand is built for and ensure your messaging rings true with them. We can safely assume all the parents who wanted to avoid saying, “Let’s go to the Rippers, kids,” would have spoken up and saved the team a lot of strife, had they just been asked.

Yes, yes, we are well aware Rippers refers to a strip club – especially in the above context, and the team also had to contend with this family-friendly comparison via traditional and social media outlets. But, we figured the legendary murderer was reason enough to ditch the name, and there’s really no need to beat a dead Jack.

Choose a wining brand or risk losing your consumer base

A rose by any other name may smell as sweet, but if you pick a poor alternative, your new brand might totally stink. When you launch or relaunch a company, product or marketing campaign, the name you lead with will fundamentally shape your success. Be bold, be edgy, but don’t be offensive or you’re going to be called on the play by fiery Twitter fingers and failing sales.

Work with a team of professionals who can provide you with objective advice and thoughtful audience analysis. This will help you avoid making assumptions about the collective interpretation of your brand. It can also help quash copyright infringements, awkward conversations and the exorbitant costs associated with a total brand overhaul.

ZOO Media Group can support you to choose the right company name, strategy and skillset to support your best (re)branding experience. From organizing and implementing your market research through to curating your creative tactics, we’re here to protect you from branding faux pas and ensure your fans remain your fans.

If you want to hit a homerun during your next big branding experiment, let’s talk.